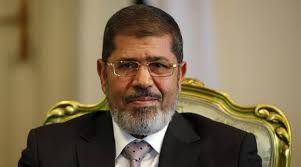 President Morsi of Egypt was and is the legally elected President of Egypt.

While one can differ with his and his party’s politics, but he and the Muslim Brotherhood had eschewed the path of violence and chosen the path of peace and democratic norms to acquire political power.

But this fragrant Spring in Egyptian politics was tragically short lived and cut short by Saudi Arabia.  Saudi Arabia, fearing the rise of the Muslim Brotherhood in Egypt and its effect in weakening and possibly losing the Al Saud hold on the land of Nejd and Hejaz, a bizarre phenomenon in itself, of a country named after a family, conspired with the USA to oust a legally elected government in a military coup and install a puppet regime complete with a pliant judiciary and all.

Gen Sisi, in a line of willing and shameless military dictators, using the might of the Egyptian Military, funded by Saudi Arabia and supported by the international might of the USA, did the Macbethian deed, and in that sowed the seeds of a terribly violent future.

The Muslim Brotherhood is being cornered. Extreme elements will once again pursue violence and militancy as a means to political power. They now have a very strong argument to justify their position. A position which will engulf all, including Saudi Arabia whose terribly evil designs to safeguard the Al Saud throne, whether against Sunni Egypt or Shia Iran will reap a terrible wind.

The death sentence awarded to President Morsi or others must not be carried out. Saudi Arabia must be stopped from once again throwing the Muslim world into turmoil as they did in 1975 when they started to export Wahabiism and all that it has manifested today.

If anybody deserves the death sentence it is those who orchestrated the downfall of President Morsi’s legally elected government.

While we condemn this deed it is important once again to remind and understand who these people are, where and how did such thought start and who fuelled and financed this evil thought, that today these people can slaughter 143 children and women in Peshawar and now these poor innocent people in Karachi.
So here’s the quick Time line. Ahmed Bin Hanbal first Sunni Imam to declare Shias and other Sunnis Kafir in the 9th Century. Next Ibn Tayymiah in the 12th Century who declared Jihad against Muslins as Ok. then Mohammad Ibn Wahab in 1744 and his terrible pact with the Al Saud Family of Saudi Arabia. Then the Muslim Brotherhood ideologues Syed Qutub his brother Mohammed Qutb and Mohammed Faraj who transformed this thought into a violent and militant Jihad. The latter two finding sanctuary in Saudi Arabia when they fled Nasser’s Egypt after Syed Qutb was executed by Nasser in 1966. Mohammed Qutb was Osama Bin Laden’s s teacher at University.
Many have commented on my leaving Iran out of this equation. I’m not absolving Iran in its attempt to promote its brand of Islam. That is another subject and yes Iran’s attempt to export it’s version of Islam has created a violent counter force.

The fact is that people who have been mentioned earlier,especially Ahmed Bin Hanbal, Ibn Tayymiah and the Muslim Brotherhood, Syed Qutb, Mohammed Qutb and Mohammed Faraj, were ideologues and not necessarily evil men. These ideologues believed in a certain interpretation of Islam, which was then transformed and interpreted to its current violence manifestation by others who used it as they have used Quranic Verses to justify their violence.
While one can promote and market their brand as does Iran but if the promotion of Wahabiism and Salafism, in which even the latter i.e Salafiism, has seen schisms within itself, between those who preach violence and those who don’t, are all facts but to advocate mass murder as a means to achieve political powe is just that. Murder.

The Muslim Brotherhood in Egypt has disavowed the path of violence and accepted democratic norm as a path to political power as advocated by Maulana Maududi and many such as Syed Qutb and Mohammed Faraj also took initial inspiration from this great scholar as well.

But just look what the Americans and Saudis did to the Brotherhood through Sisi.
So my issue is how that this thought which generates so much violence has evolved over the centuries and finally in the hands of the Al Saud has destroyed the peace and unity of the Muslim World. Let us not forget the 36 Billion $ to Saddam from Saudi Arabia which financed Saddams military advemturism against Iran in the terrible Iraq Iran war which killed 2 million people on both sides. We have to reclaim Islam from these purveyors of a decadent thought.
While I do apologize if what I state here hurts people’s sentiments, but what I say, I say as an analyst, and not a card carrying sectarian ideologue. Those who know me personally will vouch for my objectivity where it comes to what appears to be my sect.
Then in 1975 it was short walk for this evil and terrible thought, now, transformed into Wahabiism, to spread like a wildfire across the Muslim World. Over the next 4 decades from 1975 till date, fuelled by over 100 Billion Dollars of Saudi Arabian petro dollars, this terribly cruel, violent, perverted brand of Islam spread like a virus across the Globe, destroying and killing millions.
And finally coming to our “glorious” wretched country kind courtesy of that terrible man, Gen Zia, becoming this monster, now out of everyone’s control, including the Saudis, as a consequence of the Russian Invasion of Afgganistan in 1979, and all its subsequent events.
This Saudi largesse, directly and indirectly, funded and financed the rise of such organisations in Pakistan like the Sipah e Sahaba, Lashkare Jhangvi, Jaishe Mohammed, Ahle Sunnat Wal Jamaat, the TTP and finally that mother of all mobsters DAESH.

This thought also drove our modern day “heros” Osama bin Laden. Abdullah Azzam, Ayman Al Zwahiri and Abu Bakr Baghdadi to do what they did and do and continue so in the future.  As have done the  perpetrators of this heinous crime in Karachi.
We must understand that this evil narrative of violence against fellow Muslims has been around for centuries and is not a recent phenomenon conveniently attributed to Zionist, American, or Indian intrigues and conspiracies.
Saudi Arabia with its petro dollars and the afore mentioned may have accelerated the process each to achieve their own objectives but this hatred for other sects been around in the hearts and minds of fellow Hanbali / Wahabi/ Salafi Muslims, now joined by the Deobandis, for centuries.
And but of course ably supported in Pakistan by the right wing including our current PM. The Saudi’s shoeshine boy and called by the Saudis “our man in Pakistan”.
So what else but this?
The solution. Put religion back into a private contract and not a public contract.
How.By making Pakistan a better governed country with better and equitable opportunities of education, health care, security of hearth and home, employment, so the deprivation of which provides the fuel and the fodder is diminished if not altogether finished.
And then Pakistan should become a secular state not in the sense of LA Deen. But in the sense that the Quaid envisioned…you are free to go to your…….
If “somebody” can understand that better governance is the answer, that the present crop of politicians and the associated present electoral process and the present autocratic style of governance has failed.
That only grass roots, decentralized local government, with more administrative (provinces) units can begin to deliver this miracle.
So “somebody” has to bell the cat.